Changing of the Guard: Warring Influences in Pakistan 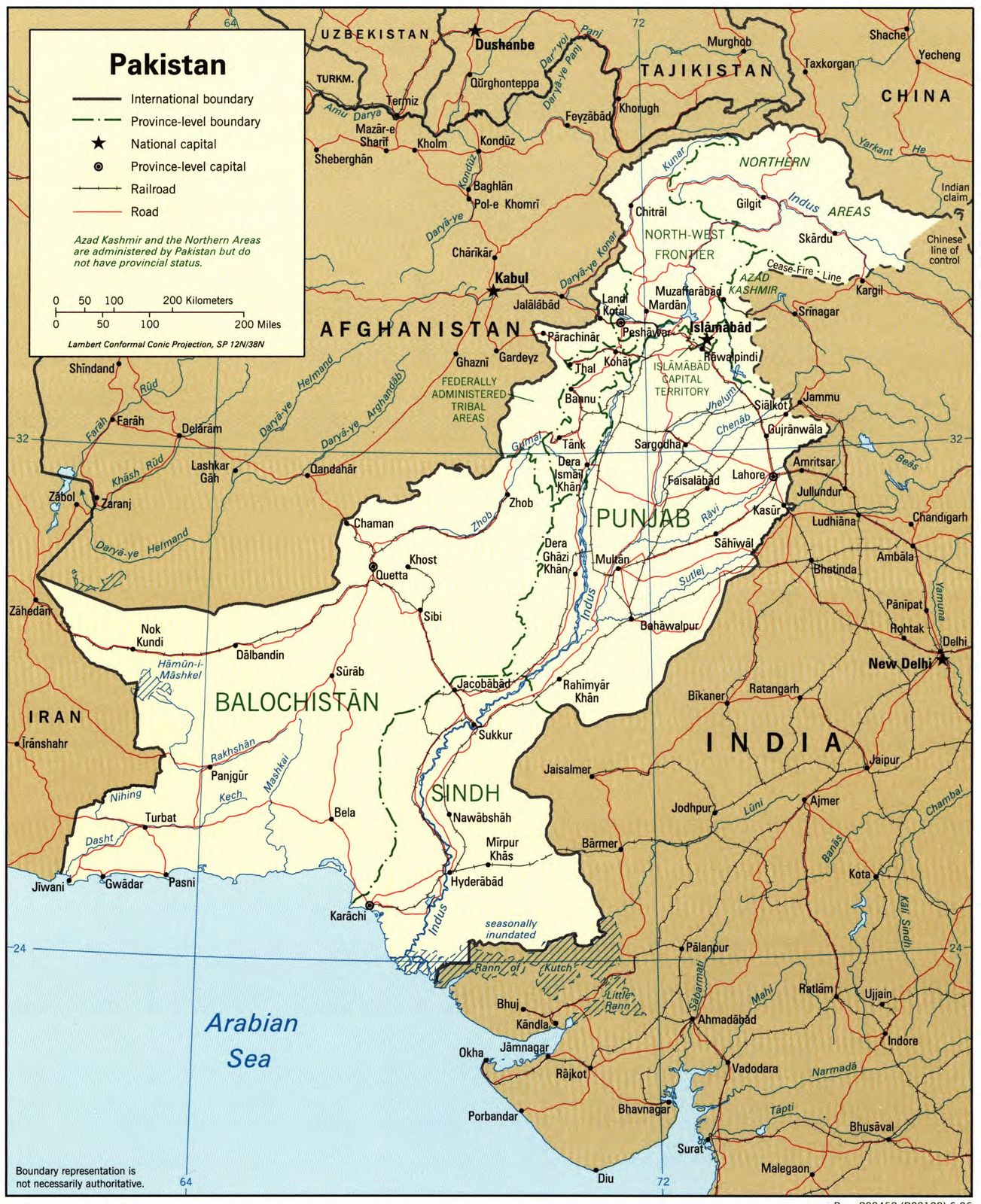 China and the US increasingly find themselves vying for dominance in world affairs. This year has seen tensions between the two countries in the trade arena, a breakdown of the 2015 cyber espionage ‘ceasefire’, and continued jostling for strategic sea lanes in the South China Sea. Fresh accusations of Chinese meddling in the US elections indicate a more publicly aggressive stance from the Trump administration. However, as the two superpowers jostle for influence, the impacts have been felt in a less prominent arena of world politics: South Asia. Host to a quarter of the world’s population, the region is dominated by the nuclear states of India and Pakistan, both of which are entwined with China and the US in complicated and yet constantly evolving relationships. As America’s politicians adopt an increasingly isolationist posture on the world stage, China is now seeking to challenge the traditional US strategic dominance in the region.

Since its formation in 1947, Pakistan has had a turbulent relationship with the US. The US has taken a somewhat capricious approach to its ally, alternatively drawing Pakistan close when it suits and chastising it when it doesn’t. During the Cold War in the late 1970s, Pakistan and the US allied to actively train and arm the Mujahideen in Afghanistan against the USSR. As the alliance weakened after the war, the US imposed sanctions on Pakistan to curtail its development of nuclear weapons. After 9/11 Pakistan was again drawn close with substantial aid in the form of Coalition Support Funds, amounting to some $13 billion, to allow supply lines through its territory for the NATO war effort in Afghanistan. In more recent times, however, as the US began its drawdown of troops, the alliance has again weakened and the two countries are drifting apart once more.

It is perhaps not surprising, therefore, that US objectives for the region are viewed as self-serving. Though many feel it is justified to use sanctions to prevent the proliferation of nuclear weapons, especially in a state with such a history of instability (in Pakistan’s history to date, no Prime Minister has seen out a full term in office, and military coups have been common), such measures are not well received, especially by a country trying to keep on a military par with its regional rival to the east. Such efforts to limit Pakistan’s military capability are also contrasted with the US-led interventions in the Muslim nations of Iraq and Afghanistan, which provide a reminder of the extent of the US military force around the world. In particular, the assassination of Osama bin Laden was seen as a flagrant violation of the national sovereignty of an ally, with Pakistanis turning their ire towards the US rather than questioning why this terrorist leader was housed in the heart of their country. As a consequence of Pakistan’s long-standing support for al-Qaeda and the Haqqani network in Pakistan and Afghanistan, used by Pakistan to to bolster its influence in the region, $300 million in US aid has recently been halted. As a result, Pakistan considers the US an unreliable ally.

In stark contrast, China is seen in Pakistan as an ‘all-weather friend’. Pakistan was one of the first countries to officially recognise the People’s Republic of China in 1950, and supports China’s position on Taiwan, Nepal, and the South China Sea. In return, China has been instrumental in supporting Pakistan’s nuclear development programme and has previously sided with Islamabad against Delhi over the disputed region of Kashmir. However, what was once a relationship of equals has more recently tilted towards China. Beijing is increasingly looking to flex its economic and military muscle in in the region and the world at large. China’s Belt and Road Initiative (BRI) has become a powerful symbol of this new Chinese desire for economic and strategic predominance, and the China Pakistan Economic Corridor (CPEC) is the flagship project in this series of large-scale infrastructure projects. Signed in 2015, CPEC connects Western China to Gwadar in southern Pakistan and the Arabian Sea. CPEC was estimated to be worth $62 billion in 2017. The promised projects within Pakistan, focusing mostly on energy and infrastructure, were met with great optimism from the government and most citizens at first. Plagued by political and economic instability, Pakistan is far from a natural choice for foreign investors, and with the promise of an economic upswing, it seemed that Pakistan’s all-weather friend had once again come to the rescue. As a result, its condition that only Chinese firms and workers undertake construction activities was overlooked.

However, this optimism now stands tainted. In Balochistan, a province of Pakistan, critics have strongly challenged the alleged re-routing of the ‘eastern route’ which would run through this often-neglected region. As visible Chinese influence grows, Pakistani media is increasingly voicing concerns over “neo-colonialism” and drawing parallels with the British East India Company. This is primarily linked to China’s 40-year lease on the Gwadar port, and its plans to build an International Port City for over 500,000 Chinese professionals around it, something which could have demographic consequences in the sparsely populated Balochistan province. Examples elsewhere further fuel the anxiety of falling prey to China’s ‘debt trap diplomacy’. Sri Lanka’s inability to pay for the Chinese-built port in Hambantota has led to control being handed over to China as part of a 99-year lease, as well as ceding 70% of its profits. China’s ‘string of pearls’ strategy of building and owning ports along the Indian Ocean fuels concerns that Beijing will try to dominate maritime trade in the years to come.

Pakistan’s new government, under Prime Minister Imran Khan, views CPEC with much more scepticism than its predecessor. It is actively scaling down activity, suspending many projects and criticising agreements it regards as unfair to Pakistani companies. A move towards more transparency on financial details has revealed that most loans for CPEC are funded by private Chinese banks. These loans are paid directly by the banks to Chinese building companies, which buy their equipment in China and often employ Chinese workers, so that most of this money never finds its way into Pakistani banking channels. Pakistan does, however, pick up the tab, and now faces a foreign reserve crisis requiring an imminent bailout of up to $7-12 billion from the International Monetary Fund, which has in turn demanded full disclosure over Chinese loans before it acts. While China’s banks have provided short term financing to counter fiscal default, it has showed little interest in bailing Pakistan out, much to Khan’s consternation. Activity has also slowed down under the second phase of the projects, which involves more sensitive decisions on the location of industrial parks.

Pakistan now stands caught between its two supposed allies. If Beijing continues to refuse to fund its bailout, this may well drive Pakistan back to the US-dominated IMF. With many in the US reluctant for IMF funds to be used to pay off Chinese loans, there is something of an impasse. However, Pakistan does have cards to play. Its cooperation is necessary for ongoing US efforts in Afghanistan, and it effectively stalled the war effort in 2011 when it cut NATO supply lines. With CPEC being the flagship BRI project, if Pakistan chooses to take money from the IMF and renegotiate its BRI deals, the balance of international power may be seen to tilt back towards the US. Khan is expected to visit Beijing in the near future, and this visit should shed light on not only the future of CPEC but also how the competition between China and the US might play out in the region and the wider world. Whatever path Pakistan decides to take, it will serve as a reminder to the two superpowers to consider carefully the political and strategic needs of their smaller allies, without which their international ambitions may quickly founder.