China’s Belt and Road: Threat or Opportunity for the Liberal Order? 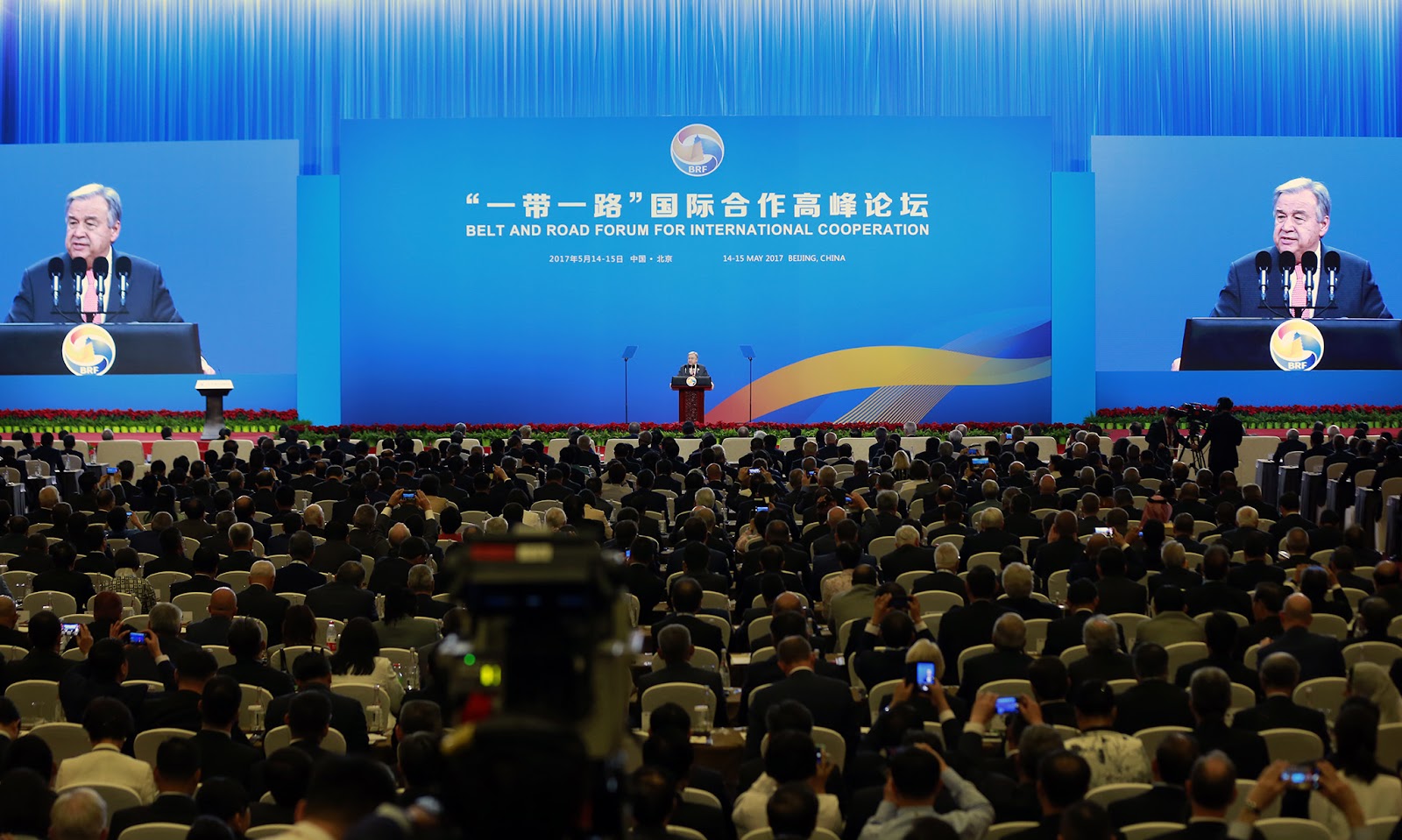 In 2013, Chinese President Xi Jinping announced the idea of building a ‘Silk Road Economic Belt’ across Eurasia. After a few months, he proposed a ‘21st Century Maritime Silk Road’ in a speech to the Indonesian Parliament. Five years later, these two projects have merged in what is arguably the most ambitious economic and diplomatic enterprise of the 21st century: the Belt and Road Initiative (BRI), or One Belt One Road (OBOR). BRI involves over 80 countries across three continents and along six economic “corridors”, plus an additional route to the Arctic. It encompasses 900 infrastructure and development projects cumulatively worth US$900 billion. The most remarkable projects include the China-Pakistan Economic Corridor (CPEC), the trans-Eurasian railways network, Ethiopia's Eastern Industrial Zone and the construction of ports in Pakistan, Sri Lanka, Djibouti, and Algeria.

The United States and regional powers in Asia and Europe have grown concerned about China’s strategy: what is the rationale behind this gigantic endeavour? The mainstream explanation is that China is rejecting liberalism and embracing neo-mercantilism. Neo-mercantilism is the economic equivalent of political realism: in a world of finite resources, the accumulation of wealth and resources in the hands of one state will increase that state’s power and prosperity. Hence the state should promote its national companies abroad and ensure a net inflow in the country’s funds. Chinese practices in OBOR seem to follow this strategy: over 80 percent of BRI projects are contracted to Chinese companies, often state-owned enterprises, and Beijing controls most of the funding for these projects through institutions such as the Asian Infrastructure and Investment Bank (AIIB), and China’s own Silk Road Fund. It can also exert heavy influence on the Beijing-based Silk Road Dispute Settlement Tribunal.

China’s neo-mercantilist strategy looks aggressive and revisionist; it seems to challenge the rules of the liberal world order -- based on the centrality of multilateral cooperation -- as well as respect for rule of law and transparency, the nexus between economic and political liberalisation, and local ownership of development projects. Instead of supporting local employment, China often sends its workers abroad to complete development projects. The AIIB and the Silk Road Fund have loose requirements in terms of transparency and political guarantees to issue a loan. This makes their loans attractive to developing countries which are in need of cash but unwilling to enforce the stringent political and economic standards set by the World Bank, the IMF, and the European Union. In addition to normative concerns, countries and institutions are afraid that BRI may cause immediate material disruptions. One issue is a surge in global debt: IMF Director Christine Lagarde has argued that BRI’s ventures could lead to a problematic increase in debt, creating balance of payment challenges and disrupting the global financial infrastructure. For example, a single BRI project in Laos is worth more than the whole nation’s GDP. How will the country pay it back? What will the company request in case of non-compliance? A second issue is the loss of sovereign control. Recipient countries such as Malaysia and Sri Lanka have complained that Chinese projects may de facto become Beijing’s extra-territorial enclaves in their respective homelands.

Recipient countries such as Malaysia and Sri Lanka have complained that Chinese projects may de facto become Beijing’s extra-territorial enclaves in their respective homelands.

Uncertainty and fear about China’s true intentions behind OBOR has provoked increasingly assertive counter-initiatives by other countries. Washington has expressed its scepticism, refusing to take part in any BRI-related project or institution. However, given the Trump administration’s criticism of international arrangements, it has not proposed an alternative structure. On the other hand, Japan presented the ‘Expanded Partnership for Quality Infrastructure’ in 2015, and together with India launched the ‘Asia-Africa Growth Corridor’ in 2017. Joined by the United States and Australia, these countries now discuss harmonising their efforts within the so-called ‘Quad’, initially a security dialogue format. Lastly, the EU has recently put forward its ‘Sustainable Connectivity Strategy’, aimed at promoting higher political, regulatory and environmental standards in the very same area where BRI operates.

In sum, BRI worries many supporters of the existing order. But is all this concern justified? Are we sure that China’s project is incompatible with the liberal order? Although some elements of BRI do remind us of economic nationalism, there is an evident contradiction between the neo-mercantilist approach and China’s economic-financial position. The rationale behind neo-mercantilism is the accumulation of wealth and resources. However, China is already a capital-intensive economy and is in a consistently positive Net International Investment Position (NIIP). Beijing does not need to accumulate further capital by investing abroad; rather, its focus should be on consumption-driven growth.

China’s alleged revisionism is a matter of debate. We tend to assume that Beijing’s ultimate goal is globalising the assertive stance that it has recently displayed in its neighbourhood. In other words, BRI would be the economic equivalent of China’s construction of militarised islands in the South China Sea. But while China has obvious strategic incentives to alter the status quo in its maritime vicinity because it regards it as part of its national territory (whether this is justified or should be accepted is another matter), it has no strong motivations to overturn the existing order completely. Despite the numerous criticisms of its human rights record and existing tensions with the West, China thrives in the liberal capitalist order: it enjoyed a massive, unprecedented economic expansion as it gradually opened up and accepted free market and its institutions, chief among them the World Trade Organisation (WTO). China’s prosperity depends in large part on the continuation of the existing order, which allows it to trade and invest. And it has acted to sustain it in the past; Beijing assumed a key role in cushioning both the Asian Financial Crisis of the late 1990s and the global financial crisis of 2008. The West often complains about China not doing enough for the international community, yet they usually forget how Beijing helped them avoid a financial meltdown.

A more careful reading of BRI suggests that its premise is, in fact, compatible with the liberal order. OBOR is, at its heart, a market-based development initiative: it aims to create the conditions for non-debt based financing in emerging countries. It is not a new Marshall Plan, because it is not based on grants, but on investment. BRI uses the market to build markets and the necessary infrastructure to sustain them. This is consistent with the post-WWII, US-led order’s commitment to guaranteeing prosperity through the promotion of the free market. Moreover, the values promoted in BRI – openness, joint development and consultation, and win-win cooperation – are not too different from the established goals of international cooperation. There are at least two ways in which the Belt and Road platform can strengthen the existing order. Firstly, BRI reaches the parts of the world that the Western financial infrastructure has been the least able to penetrate: China’s own Western regions, South and Central Asia, Sub-Saharan Africa. These countries and regions look at OBOR as a way to insert themselves into financial markets and into the global value chain. Secondly, by investing in underdeveloped and politically volatile regions, China will increase its stakes in the preservation of peace and prosperity. In order to protect the soon-to-be-built infrastructure in Northern Pakistan, Beijing will need to establish a mechanism for security governance in conjunction with the Pakistani government. Similar security concerns arise in Central Asia and Africa. China has already increased its stake in international security operations, sending peacekeeping forces in a number of international missions, from Mali to South Sudan to Darfur. BRI epitomises the nexus between economic and security governance, both of which require a higher Chinese involvement as a responsible stakeholder.

Will China use the Belt and Road Initiative to overturn the international rules-based order? The answer is not that straightforward. Certain aspects of BRI seem to pose a direct challenge to the existing infrastructure of development. China’s unilateral behaviour has raised legitimate concerns. However, BRI is not fundamentally opposed to the liberal order: there is at least the potential for it to become an additional tassel in the jigsaw of global governance. This new interpretation calls for a different, more engaging Western strategy vis-à-vis BRI. If they keep containing or ostracising the initiative, they will soon be alienated from an expanding project that attracts many developing countries, some of which are ready to accept China’s assertiveness. By participating in BRI projects, instead, Western leaders can influence the financing process, by pushing the inclusion of higher standards in the lending process; they can counter instances of Chinese unilateralism by blocking projects that do not have a minimum level of local ownership; and they can bridge the standard gap between Chinese and international requirements. They have the opportunity to lock in China as a responsible actor, linking the economic and security governance elements of BRI to the existing structure of global governance. In short, engagement can turn the diplomatic enterprise of the 21st century not into a threat to the rules-based order, but into a new asset.