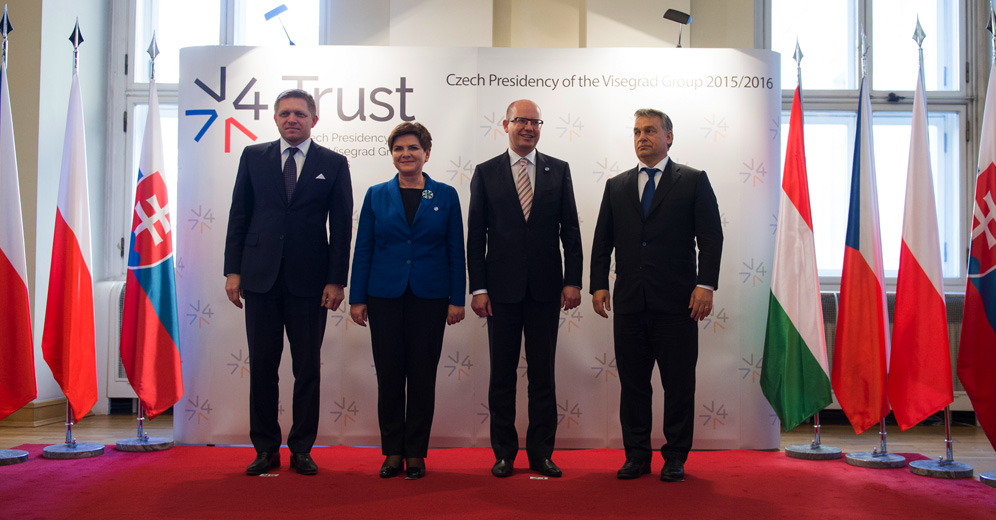 In 1991, the leaders of Czechoslovakia, Poland and Hungary met to form the Visegrad Group, an alliance of central European countries throwing off the shackles of Communism and hoping to join the European integration process. As the 30th anniversary of 1989, the year that signified the collapse of Communism in Eastern Europe, approaches, the Visegrad Four are rejecting ‘EU values’ of liberal democracy while some are advocating closer ties with Russia. The four countries are also facing an unexpectedly strong pull towards another eastern power, China. How far are these countries willing to abandon EU principles and what are the disparities between the attitudes of their leaders, and that of their societies?

Considering past relations between the Soviet Union and the countries of the Visegrad Four, it would seem surprising that their leaders have become some of Europe’s most vocal Kremlin supporters. Prime Minister Viktor Orbán of Hungary invited Vladimir Putin to Budapest after the 2014 annexation of Crimea and more recently criticised EU sanctions towards Russia in February 2017. Putin’s authoritarianism has influenced the creation of so-called ‘illiberal democracy’ in Hungary. President Miloš Zeman of the Czech Republic has called the Crimea annexation a “fait accompli” and has openly voiced his support for Russia. He has also repeatedly attacked the Centre Against Terrorism and Hybrid Threats, established in January 2017 in Prague to combat Russian disinformation campaigns. Zeman and Orbán’s backgrounds as liberal dissidents may seem surprising in this light, with both men championing liberal democracy in their youth. As for Slovakia, the former Prime Minister, Robert Fico, visited Moscow in 2015 to commemorate the 70-year-anniversary of the end of the Second World War, denounced EU sanctions and has questioned western narratives regarding the war in Eastern Ukraine.

By contrast, Poland’s de facto leader, Jarosław Kaczyński is less inclined to support the Kremlin, especially considering his belief that Moscow was behind the 2010 Smolensk crash that killed his brother, the former president Lech Kaczyński. Poland remains one of the greatest advocates of EU sanctions against Russia.

Support for Moscow can be partially explained by economic pragmatism. A huge proportion of these countries’ energy supplies comes from Russia, making criticism of the Kremlin risky. Furthermore, the four leaders are not entirely sycophantic: all have expressed anti-Kremlin views, including opposition to the Nord Stream II pipeline and its potential to be used in the blackmail of Ukraine. Three of the four (Hungary, Poland and Czech Republic) expelled Russian diplomats after the poisoning of Sergei Skripal in Salisbury.

While the pro-Kremlin tendencies of most of the Visegrad Group leaders may worry Brussels, what do recent elections reveal about the population’s attitudes towards Russia? In Slovakia, the fascist and pro-Russian People’s Party-Our Slovakia (LSNS) entered parliament for the first time with 8% of the vote. In the Czech Republic, January 2018 saw Zeman re-elected for a third term, while another pro-Russian far-right party entered parliament for the first time in October 2017 with 10.6% of the vote. Once more, Poland is an anomaly in this regard, with no mainstream pro-Russian political parties. Hungary’s ruling party Fidesz is staunchly pro-Russian as is the far-right party Jobbik, the second largest party in parliament.

Aside from politics, GLOBSEC (a global think-tank based in Bratislava) has published several reports on the attitudes of the societies of the four countries. Its 2017 ‘Vulnerability Index’ highlights the various ways in which Russia has influenced attitudes in Central Europe, with multi-pronged disinformation campaigns through the internet and its international TV channels, RT and Sputnik.

A 2018 GLOBSEC report notes that Slovak society displays the highest level of pro-Russian support among the Visegrad Four. The idea of pan-Slavism and the role of the Soviet Union in the Slovak National Uprising of August 1944 has remained in the collective memory of the Slovak public. This explains the increasing desire to be allied with Russia (13% of the population according to polling data), the highest proportion of the four countries. In stark contrast, 71% of Poles consider Russia to be a threat.

In the Czech Republic and Hungary, Zeman and Orbán do not speak for the majority of their populations with their pro-Russian views. The crushing of the Budapest Uprising and Prague Spring still play a role in the public’s imagination, with only 5% of respondents in both countries desiring an eastward alignment. The 2018 GLOBSEC report concluded that around half of the Czech, Hungarian and Slovak populations would prefer their countries to find a middle-ground between West and East. Pragmatism is once again favourable, suggesting that claims of an imminent Russian takeover of Central Europe are alarmist.

The crushing of the Budapest Uprising and Prague Spring still play a role in the public’s imagination, with only 5% of respondents in both countries desiring an eastward alignment.

While this struggle takes place in the heart of Europe, a third power, China, has sensed an opportunity. Established in April 2012, the 16+1 initiative aims to forge closer ties between China and the former members of the Soviet bloc in Europe. 16+1 is also linked with China’s Belt and Road Initiative that seeks to link 64 countries from Asia to Europe. The initiative has led to sizeable Chinese investments in the region. From 2012-2016, China’s infrastructure investment in the Visegrad 4 totalled over $4.5 billion, although it is yet to invest in Slovakia. Chinese banks have also funded a railway connecting Belgrade to Budapest, the construction of which began in November 2017. In the same year, the Chinese Academy of Social Sciences opened a branch in Budapest, in order to promote “mutual understanding and intellectual cooperation.”

The Chinese have found allies in Orbán and Zeman. The effects of the 2016 migrant and refugee crisis compounded by EU criticism of their authoritarian policies have pushed these countries towards China. Orbán has stated that he will seek Chinese investment should the EU fail to provide sufficient funds, while Zeman has been cultivating links with China for years. In 2015, he was the sole western leader to attend a military parade in Beijing, and he was close with the now-arrested Ye Jianming, founder of CEFC China Energy.

This potential co-operation could pose major problems to the EU. Through its influence over these countries, China can thwart attempts to oppose its actions regarding the South China Sea, Taiwan, and human rights issues. China is seen much more favourably than Russia, or at least neutrally, amongst the majority of populations in the Visegrad Four and this makes cooperation less likely to cause domestic backlash. Furthermore, Chinese money comes without the caveats of transparency associated with EU funding, increasing and abetting corruption in the region.

Both East and West are competing to create new spheres of influence in the heart of Europe, forging a new order. The EU is still heralded as the best means to prosperity, freedom and democracy by the majority of the Visegrad Four’s populations, and the outcome of negotiations over EU budget allocations will play a huge role in the struggle for influence. Yet, dependence on Russian energy and public disinformation campaigns mean the Kremlin is tilting attitudes eastwards, particularly in Hungary and Czech Republic, even though it is still encountering resistance in Poland. All the while, China offers a tantalising alternative to eastern Europe’s political leaders. Looking beyond 2020, the battle for the future of the Visegrad Four is very much in the balance.